Today marked the end of a two month battle with a boss fight, or at least that’s how it felt afterwards. I’m talking about my fish pond. For the last couple of months the pond has been close to empty of water, seemingly a leak draining it every time I topped it back up. I tried everything prescribed on various pond sites,

I removed the edging rocks and made sure the liner was in the right place, I topped up the water and poured milk on the surface, which apparently causes a whirlpool type effect at the site of the leak, I spent  several hours visually inspecting the liner around the water level, I scrubbed the now ten year old liner of algae in case I was missing a hole but no joy. I even cut out two massive root sections of the Brandy Bottle lily, almost two thirds of the entire plant that covers the surface of the pond.

This weekend was my last resort. Replacing the liner with another would cost close to £200 or a pre made fibre glass one, closer to £400. I climbed into the now dry upper shelf of the pond and inspected inch by inch, lifting creases and removing more algae. Eventually I found it, a couple of inches below the water level, a one inch gash, partially hidden by a fold. So I removed more water, cleaned and dried the hole, patched it, double patched it and refilled. By last night I was jumping for joy, the pond stayed filled. The sense of satisfaction was incredible. Hours of work had been poured into thi little hole, time I’d much rather have spent gaming or gardening. 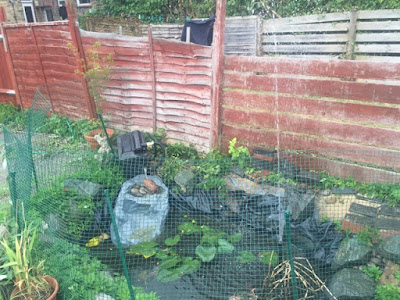 Today I installed a new pump to feed my filter/waterfall and set up my old pump to act as a fountain. The thing sprays a good seven foot in the air and looks wonderful! I just hope my fish are as happy as I am!