Returning to my plot after over a week away, I didn’t know what to expect. The weather was hot and dry by all accounts and with no-one watering I was worried some had died off. Thankfully the opposite was true. A lot had grown and most impressive was the sweetcorn. The hairs turning brown is generally a sign that a cob is ready, so I cautiously picked one off and opened it up and it was a thing of beauty. I quickly went through and picked another half dozen cobs with dark hairs, leaving the rest to continue to ripen. 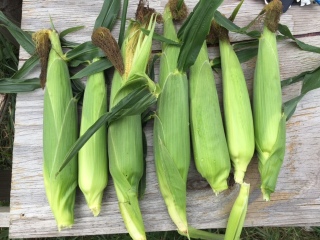 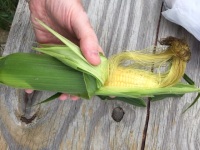 The greenhouse had not faired so well. As it is fully enclosed, even the smallest rainfall wouldn’t have reached so the tomatoes and chillis, though fruiting are starting to look a little bedraggled. A good water and feed will hopefully get them back on track.

The Cucamelons, which I hadn’t expected to grow have actually done quite well and in fact one of the plants has started producing.